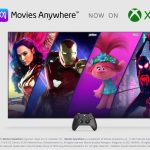 The Movies Anywhere app is now available to download on Xbox One, Xbox One S, Xbox One X, Xbox Series X and Xbox Series S, and it can also be downloaded from the Microsoft Store in Windows 10. The app on Xbox consoles supports 4K, Dolby Vision, and Dolby Atmos, which makes it ideal for […]