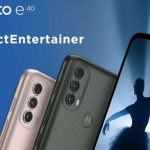 Motorola will be launching a new affordable phone in India next week. After launching three new devices in the Moto Edge 20 series, now the company is shifting its focus to the budget segment.  The Moto E40 will be launched in India on October 12 at 12 pm IST. The phone was also announced in […]