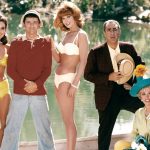 The Suicide Squad director James Gunn says he once pitched a movie of Gilligan’s Island with a cannibal twist. The original show about a group of castaways becoming stranded on a desert island during what was supposed to be just a three-hour-tour aired on CBS from 1964 to 1967. Years after that original three-year CBS run, […]