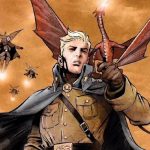 Kurt Busiek is returning to Image Comics and bringing along his fan-favorite series Astro City and Arrowsmith. Fans can expect a new Arrowsmith miniseries beginning in January 2022 and an Astro City one-shot in March 2022 that introduces the new status quo of the upcoming series. Image also teased that the creator would be bringing more new comics such as Free Agents and another story […]