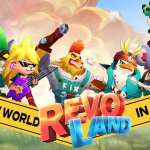 Dubai, UAE, April 01, 2022 (GLOBE NEWSWIRE) — Revoland emerged as an E-sports game based on blockchain technology. The much-anticipated Revoland will be officially released in April 2022. About Revoland According to the Revoland team, Revoland is a blockchain-based multiplayer online battle arena (MOBA) game where players can gather friends to form a team, fight […]