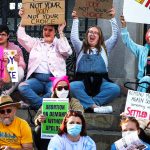 In April 2017, Latice Fisher, a woman from Mississippi, arrived at a hospital suffering from a miscarriage. She was later indicted on a charge of second-degree murder. Prosecutors used her search history and her online purchase of the abortifacient drug misoprostol as evidence that she had murdered her fetus. After Politico released a draft of […]