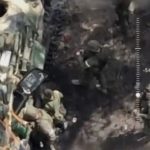 Shocking, new footage shows a Russian soldier flipping off a Ukrainian drone before being blown up by enemy munitions. In a 90-second clip posted Sunday, a drone zooms in on a group of Russian troops standing around a vehicle. About 17 seconds into the footage, one of the six Russian soldiers turns his head up to […]